In Steve Solomon’s book “Gardening When it Counts” he shows a very simple recipe for compost tea.  Take a shovel of compost, throw into a bucket and then fill with water.  Stir daily and then apply to the garden after one week. 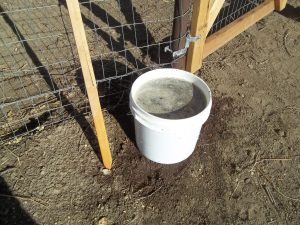 We’re giving it a go here on our homestead.

Compost tea is a great, natural fertilizer.  Ben Franklin once said “An ounce of prevention is worth a pound of cure.”  That applies in this case because compost tea is a superfood for plants.  Healthy plants grow strong and provide more nutritious food for us humans to eat.  Healthy plants are also better resistant to drought, insects and other problems.

This reminds me of an interesting story my boss at work told me.  The 2011 growing season was a bad one for apricots at the farm where I work.  A lot of preventative work had been done using organically certified fertilizers, fungicides and pest controls.  About the time the crop should have been ready to harvest (the trees were almost bare) my boss looked across the fence.  A neighbor had a few acres of apricots and they had been badly neglected for years.  No pruning, fertilization, or even watering was done.  Those trees were absolutely loaded with fruit!  It was as if mother nature was saying “you can’t outsmart me!”  Needless to say, we made drastic changes for the 2012 growing season.  We’re not doing anything but applying compost tea (a much more technical recipe and process to brew that what I’ve described above, however) through the foliar sprayer.  Guess what?  Now our trees are loaded with fruit!

Here’s to a successful 2012 growing season!

The past month has been very low on blogging activity here; since the birth of our daughter, we’ve been quite a bit busier.  In the mean time, we also had a very bad cold run through the house.  This cold started with a sore, scratchy throat and then ended up settling in your sinuses for a few days doing the runny/stuffy combo.  Pressure was created to the point where your nose feels as if it is six times bigger than it really is.

I started doing a little internet searching about prevention of sinus infections, because I wanted to steer clear of a doctor’s visit and antibiotic medication.  I was very surprised to find tons of natural remedies out there.

Here’s what I did: several times daily make yourself a hot cup of tea.  Green tea or black tea, whatever your preference.  A little caffeine will help you feel better.  After steeping the tea, add a tablespoon of apple cider vinegar, a dash of cayenne pepper and a little honey to combat the sour taste of the vinegar.

I’ve always known that hot beverages will help drain sinuses, but the apple cider vinegar does the same thing.  Especially when hot, those vapors rise and do their magic.   Spicy foods also make your nose run, and so that was the cayenne’s contribution.  The main point is that you want to get as much of that stuff out of your sinuses as you can and it will help to alleviate the pressure too.

It made me feel a lot better and so I did this several times daily and continued a day or two after I thought I was better.  A few days later, Courtney started with a sore throat.  I immediately made her one of these doctored-up teas.  Much to our surprise, her symptoms disappeared!  I had also read that taking a little apple cider vinegar soon after noticing symptoms of a cold can completely change the course of a cold and shorten its duration.

I’ve also read that a neti pot can help to remove a lot of that sinus junk, but I didn’t try that.  Maybe next time.